In the late 1980s, a community effort began to restore and preserve Longfellow Creek, one of four major creeks that flow year-round within the Seattle city limits. The creek runs for four miles, from Roxhill Park across from Westwood Village to the Duwamish River at the head of Elliott Bay.

Longfellow Creek is an oasis for fish, wildlife and people within the urban landscape. In particular, it's one of only four remaining salmon runs in Seattle.

However, as rain washes over the geographic area, toxins such as oils, lawn and garden chemicals, pet wastes, and other contaminants are carried via a network of storm drains and pipes to the creek. That's why High Point’s natural drainage system and other community efforts to reduce our impact on this creek are so important.

By incorporating elements such as grass and vegetated swales along the streets, porous pavement and a large storm-water pond, High Point's award-winning, nationally recognized natural drainage and stormwater management system slows runoff, and allows for pollutants to be filtered before reaching the creek.

An urban watershed is a natural drainage area, bounded by ridges, that has been altered over time by paved surfaces such as streets, buildings and parking lots. The High Point neighborhood makes up 10 percent of the Longfellow Creek Watershed, so Seattle Housing Authority—in partnership with Seattle Public Utilities—went to great lengths to ensure High Point would have minimal impact on the creek.

The city's success in protecting Longfellow Creek is an example of the progress that’s possible when a community comes together with a common goal.

Along Longfellow Creek winds one of the neighborhood’s newest trails: the Legacy Trail. This four-mile trail leads you through an urban wilderness of native plants and wildlife. 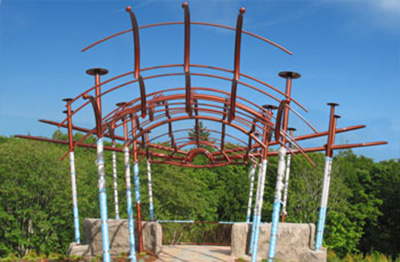 At its south end, the trail begins at Roxhill Bog in Roxhill Park where over 250,000 native plants have been planted to recreate the historic peat bog. It then cuts through Westwood Village shopping center, winding through neighborhoods to a trailhead just east of Chief Sealth High School.

This is where the creek first appears from beneath the ground. Here, a wheelchair-accessible sensory garden invites you to explore through sight, sound, smell, and touch. (The Dragonfly Garden provides a dramatic entrance to Dragonfly Pavilion. Which can be found along Legacy Trail.)

As you continue your urban hike along the trail through wooded shade, open spaces and neighborhood paths, take time to admire both your surroundings and the striking artwork guiding you. In 40 locations along the trail, brightly-colored art panels with images of plants help hikers familiarize themselves with the urban watershed. In addition, neighboring buildings have incorporated architectural artwork inspired by the creek and trail, serving as a reminder of the importance of the creek to the community. 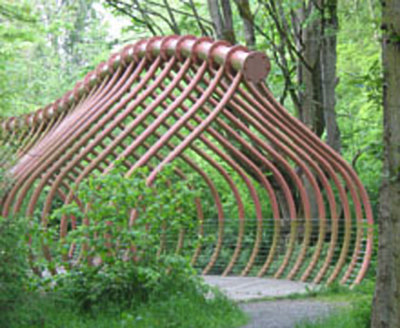 The northern terminus of the trail is at SW Yancy Street, home to the creek’s resident beaver. But before you finish your hike you’ll pass through the Fishbone Bridge — an enclosed bridge with open walls designed to resemble a salmon skeleton. After the bridge you’ll end your hike at Dragon Fly Pavilion, north of the West Seattle Golf Course and the community of High Point. To access the trail from High Point, just walk down the staircase in the Northeast corner of Bataan Park.

For information on how you can volunteer to preserve and protect Longfellow Creek and Legacy Trail, contact Sheryl Shapiro at (206) 615-1443.