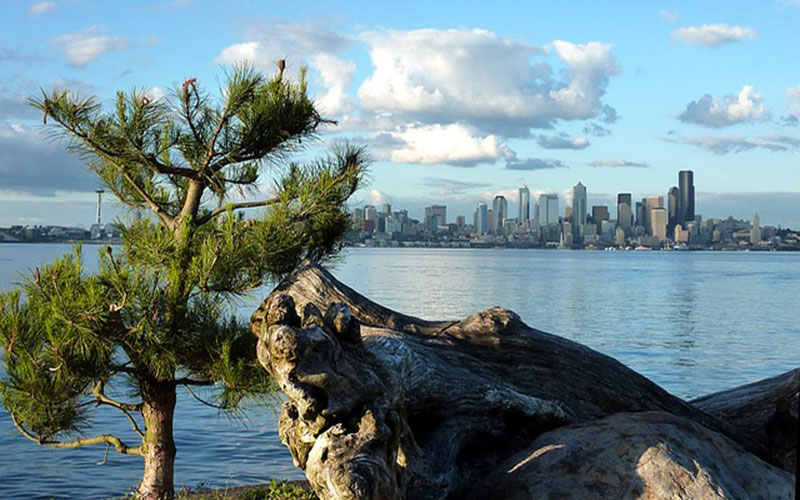 West Seattle has a rich history with a significant role in Seattle’s founding. In addition to historical sites, it also features beautiful landmarks and amenities, public services, and arts and recreation. While exploring High Point, be sure to also check out some of the things that make West Seattle so unique. 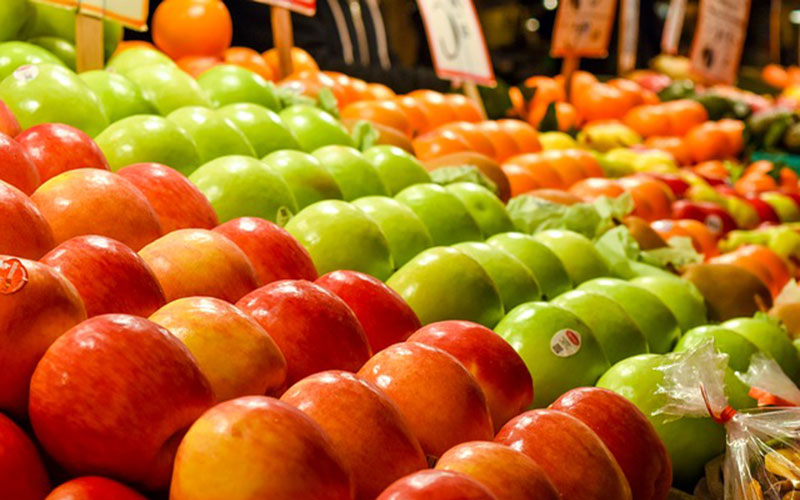 Year-round, thousands of Seattleites visit the West Seattle Farmers' Market each Sunday. As they browse the tables of the 35-plus regular vendors, they fill their baskets and bags with fresh vegetables, fruit, honey, wine, cheese, baked breads, meats, and cut flowers.

The market has a warm, small-town community feel, with people taking the time to catch up with friends, neighbors and the farmers—many of whom travel hours to sell their goods.

The West Seattle Farmers' Market is located in the Alaska Junction at the corner of SW Alaska and California SW. It is open 10 a.m. to 2 p.m. on Sundays year-round. Discover more by visiting their website at http://seattlefarmersmarkets.org/markets/west-seattle

For your summer commute to downtown Seattle, try heading for the water. The King County Water Taxi (formerly called the Elliott Bay Water Taxi) makes your trip to Seattle quick, convenient, and relaxing.

The Elliott Bay Water Taxi began in 1998 as a way to ease congestion on the West Seattle Bridge. Today, the taxi helps more than 100,000 people travel to and from West Seattle for work and play. 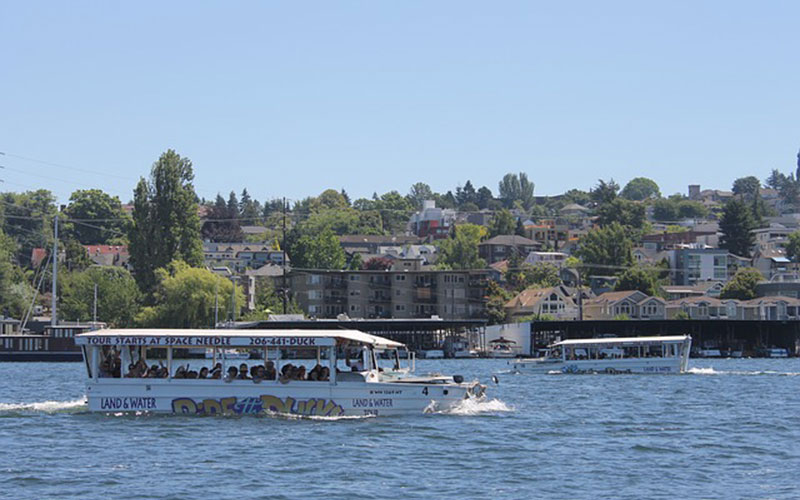 In July and August, the taxi sees about 1,000 passengers daily, according to the King County Department of Transportation. About 50 percent are work commuters, while the other half are headed downtown for recreation, shopping, or dining. For tourists, it also serves as an inexpensive tour of the bay on their way to Alki Beach.

The taxi operates year-round, between Seacrest Dock at the edge of West Seattle’s Alki Point and Pier 55 on Seattle’s downtown waterfront at the foot of Spring Street. Crossing in just 10 to 15 minutes, it leaves every 30 minutes during commute times and every hour during the middle of the day. There's even an extended schedule on Mariners' game days.

The ride is only $5.25. (Children under the age of 5 ride free, and there’s no extra charge for bikes.) Bus transfers are available for passengers headed downtown and beyond. Passengers headed to West Seattle enjoy free shuttle service to Alki Beach, the Junction and the Admiral District.

Alki Beach is where it all began for Seattle. It was here in 1851 that the city's founders landed on a cold, stormy November day. In their first winter they were greeted by Chief Noah Sealth and the Duwamish people.

Picking up a word from the Chinook trade jargon, the settlers named their new home "New York Al-ki" — Al-ki meaning "by and by" New York.

The beach became a popular summer resort in the early 1900s, and it maintains that feel today. Older beachfront cottages decorated with floats and shells are sandwiched between newer, glossier condominiums. It's a scene reminiscent of a California beach town.

In the summer, scores of people take to the beach—cycling, rollerblading, jogging, playing volleyball, or just catching a few treasured Seattle rays. Popular restaurants line the street, and boutique shops offer tropical beach attire, although the temperature of the water rarely tops 56 degrees.

Unlike a resort town, things don't close down at Alki Beach when the temperature drops. People visit year-round to exercise or dine, enjoying the spectacular views of the Sound and downtown Seattle. In December, West Seattleites and neighbors from other parts of town join together around beach bonfires to enjoy hot cider and watch the passing Christmas Ships.

On your next visit to Alki beach, check out these one-of-a-kind attractions:

The Statue of Liberty

Not the real one, of course, but a small replica donated to the park by Reginald H. Parsons and the Seattle Council of the Boy Scouts of America in 1952.

Site of the Former Luna Park

At what was once the site of Luna Park, an amusement park in the early 1900s, sits a 2.5-ton anchor dredged up by the Northwest Divers Club. When tide is low, you can still see some of the pilings of the former park.

At Alki Point, you’ll find a monument to the arrival of Seattle’s founders, including many names you might recognize from Seattle streets and landmarks: Denny, Lander, Terry.

Newly rebuilt, the Alki Bathhouse offers art classes for individuals of all ages. Courses include pottery, cartooning, drawing, and painting.

In 1902, prominent Seattleites William and Gladys Bernard began making plans for a permanent home on Alki Beach. The couple had spent several summers camping on the beach with their children and wanted to enjoy its beauty year-round.

Two years later, they moved into their new log home which they named the Fir Lodge. Unfortunately for them, in the early 1900s West Seattle proved to be too inaccessible to Seattle to stay there for long, so after three years, they moved back into the city. Fortunately for us, however, their legacy remains today.

Over the years, the Fir Lodge has been a members-only club for the Seattle Auto and Driving Club, a boarding house, a veteran's home and, most recently, a popular neighborhood restaurant. In 1995, the lodge's carriage house and stables were purchased by the Southwest Seattle Historical Society. After restoration, the house reopened in 1997 as the Log House Museum.

The Museum offers a resource library for local schools, with a comprehensive collection of research material for students and educators alike. Heritage Education kits include authentic and reproduced artifacts, documents, maps, and photographs, supplemented by lesson plans and activities relating to the landing of the first white settlers and their interaction with local Native Americans.

The museum's on-site exhibit features everything from turn-of-the-century photographs to a 1916 whiskey bottle discovered in the home’s foundation. There are volunteer opportunities, events, and special exhibits throughout the year.

For information on tours, volunteering, membership, events or resources, check out the website at or contact the museum at 206-938-5293.

The visual, lyrical and theatrical arts are alive and thriving in West Seattle. Many local artists visual and performing artists showcase their work around town. ArtsWest is a key West Seattle organization representing the rich artistic diversity of this community.

ArtsWest operates the ArtsWest Playhouse and Gallery located in the heart of the West Seattle Junction at 4711 California Ave. SW. This location is the hub of the organization’s activities.

The theatrical season begins afresh each October with a new lineup of plays and productions. The theater is intimate, seating 149 people, meaning there is not a bad seat in the house. The playbill features everything from musicals to comedies to classics. In addition to theater, the organization offers musical programming, including cabarets, choral groups and jazz performances.

The theater’s gallery space features local and Northwest artists carefully chosen to reflect and enrich the play being presented on the main stage. Conversational artist talks are featured at each show’s reception, where each artist in the exhibition speaks briefly about their work and visitors have the opportunity to ask questions and engage in conversation.

ArtsWest’s creative inspiration spreads into the rest of West Seattle. For example, the ArtsWest creative team collaborated with the Pomegranate Center on the design of the High Point neighborhood’s amphitheater park.

To check on programming, tickets, gallery, and details about all things happening at ArtsWest: